In 2009, after two decades of active marine research, conservation and education, the Blue World Institute launched an initiative to establish a Marine Science Centre. Initially, the idea was to open a smaller exhibition space devoted to the marine environment, part of which would be the rescue facility for marine animals (primarily sea turtles). It was, however, soon replaced by the concept of a Marine Science Centre befitting the 21st century; a dynamic, interdisciplinary, engaging communal hub. The position for the new Centre is located on the central waterfront of Mali Lošinj, offering ease of access from land and sea, while simultaneously providing an exceptional public facility, unparalleled around the Adriatic Sea and beyond.

Recognising its immense potential contribution to the local community and the wider region, the initiative is supported by many public officials, prominent public figures and organisations including the City of Mali Lošinj, the Ministry of Tourism of Croatia, the (former) President of Croatia, Prof. Dr. Ivo Josipović who visited the premisses, the (former) Minister of Tourism, Mr. Gari Cappely, the (former) Minister of Regional Development and EU Funds, Mr. Marko Pavić and numerous organisations, institutions and universities from the Croatia, Europe and globally who expressed their interest in participating in the future activities.

Located in Mali Lošinj Bay, a state-owned property built on the waterfront in the 1950s stands abandoned since 1970, without use and left decaying leading to the devastation of its infrastructure and its state presents a risk for people and reflects a bad image for the city itself. The Blue World Institute proposed putting this state property into a new use and to the benefit of the local community, through development and construction of a modern Marine Science Centre (MSC) on the location.

The idea was put into motion in 2010. After several rounds of presentations and discussions it received unanimous support from the Council of the City of Mali Lošinj, the former Mayor Mr Gary Cappelli, the Committee for Urban Planning of the City, the Tourist Board of Mali Lošinj and many others. With the significance of the project for environmental conservation, tourism and the island development in general in 2013. the Ministry of Tourism, the Ministry of Economy and the Ministry of Regional Development and EU funds funded initial development feasibility study while expecting Croatia’s accession to EU and application for funding through the EU Operational Programme Competitiveness and Cohesion 2014–2020. Meanwhile, Studio MVA architects developed the building’s conceptual design and 3D rendering. Special attention was paid to the principles of energy efficiency and sustainability making it among the first such public buildings on the Croatian islands. Unfortunately, due to issues of property ownership the entire project was put on hold.

The location allows easy access from the city centre and from the Čikat bay; ease of access by cars, buses and boats makes it ideal for group visits, schools and excursion boats, with nearby facilities for parking. The proximity to the port allows the construction of a small dock for MSC research vessels and excursion boats. 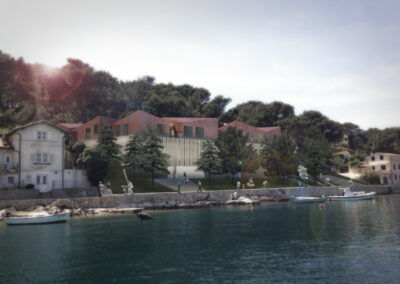 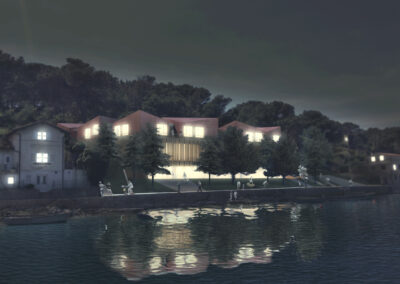 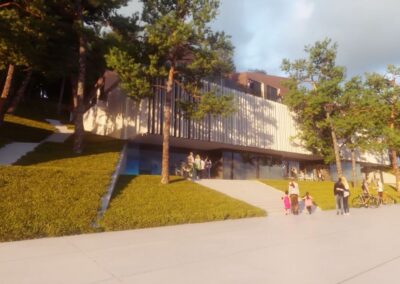 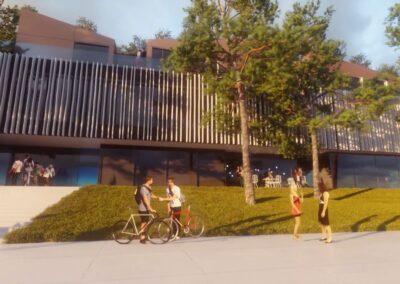 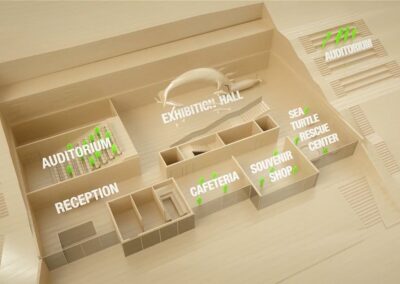 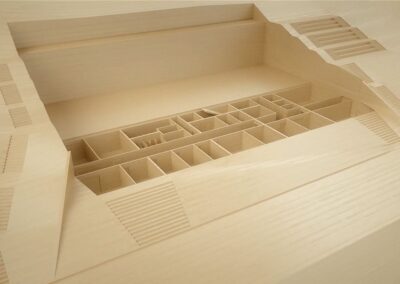 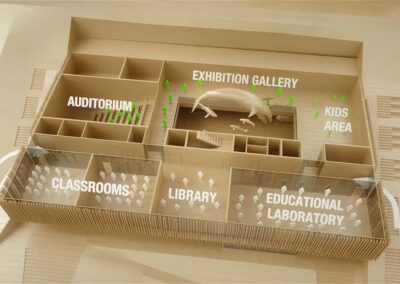 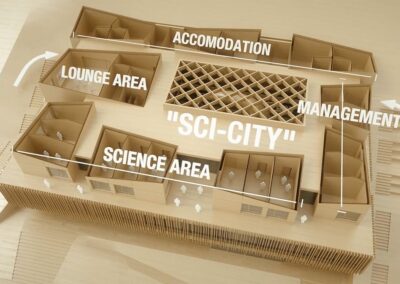 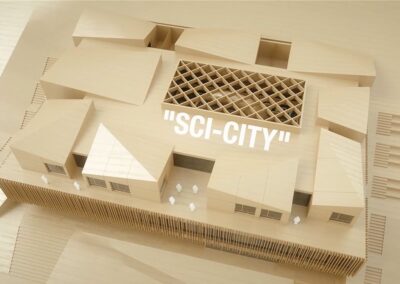 The Marine Science Centre is a project that combines interdisciplinary science, culture, and education in order to promote sustainable development community involvement community in the conservation of natural heritage and environment. The project brings together scientific research, educational activity, cultural experience, tourism, learning and their engagement in everyday life. It stands to improve the quality of life of residents, promote scientific innovation, and support economic development, in particular tourism.

The MSC’s vision is to become a regional centre of excellence offering opportunities for interdisciplinary scientific research, of students and researchers from across Adriatic and the Mediterranean. By using applied science, the Centre will actively participate in the design and development of innovative methods for the conservation of marine species, habitats, and ecosystems. The MSC will offer a contemporary educational framework based on permanent – and temporary thematic – exhibitions, public activities such as lectures, workshops, events, panel discussions and informal talks; such a programme will increase public understanding of the connections between the natural environment and human society. MSC visitor experience with be thought provoking and comprehensive, stimulating and fascinating, immersing and animating. 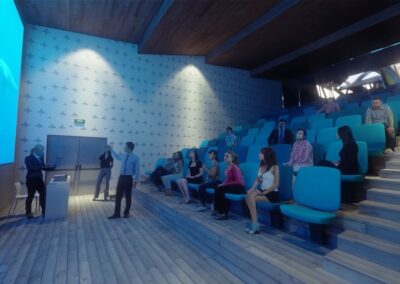 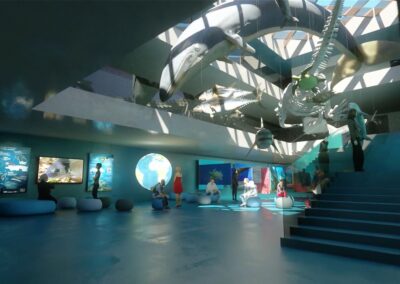 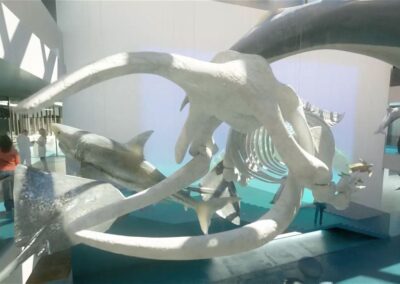 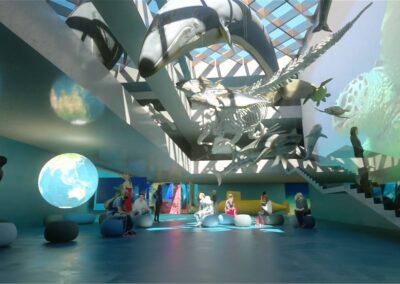 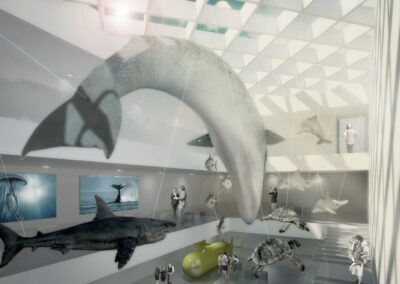 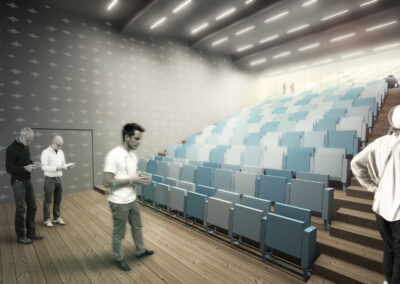 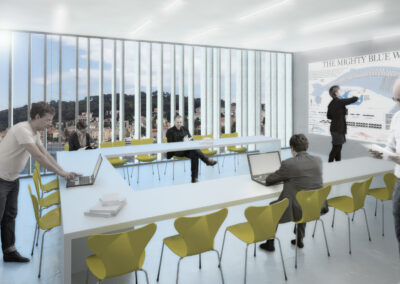 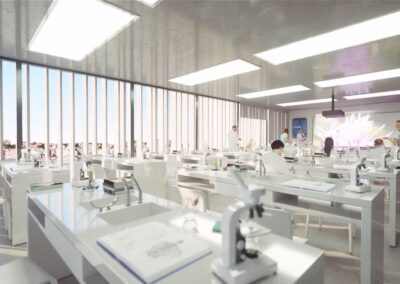 Using existing topography, the building is organized on three floors, each with external direct access. The rooms are centred on a central three floors shaft with some of the Centre’s main exhibits and visually connecting the Centre’s facilities while offering a flexible usage scenario. The building will rely on available techniques and technologies to reduce or fully neutralize the impact on the environment, aiming to become a model for planning other public or private buildings.

This animation is a 3D presentation of a conceptual design of the space. The interior layout and design, together with development of the permanent exhibition, will be resolved during final centre development project. The multipurpose design allows for a variety of facilities and programmes: